He began to study piano when he was only eight. In 1993 he received the piano diploma at the Conservatory “G.da Venosa” in Potenza .

In 1987 he formed his first band performing in live shows, wedding parties and places like that until 1991 when he released his debut album “STOP”. From then he started to perform as soloist.

In 1992 he was out with “SOULMAN” receiving plenty of local media attention, from newspaper to radio, particularly RADIORAI.

From 1996 to 2000 Pino Gioia collaborated with the M. G. L. music production. He was engaged as composer and producer of sound tracks and political party hymns. He collaborated with Warner Bros. and Galletti – Boston too. 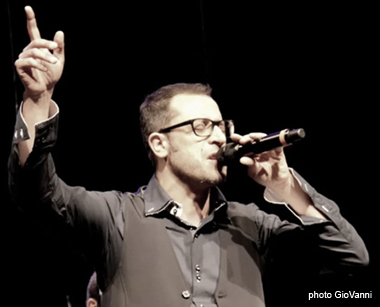 From 2000 to 2002 he was touring with the show “SOLO…QUASI LIVE!”. During that period he performed in about 250 concerts, in pubs and outdoor, either in Italia and abroad. The tour become a compilation, published on 1st Dicember 2000. RAI 3 and RETE4 gave a lot of attention to that work.

In 2002 “QUELLO CHE VOGLIO" was published in Canada by the Riviera Records – Toronto (where he begun collaborations as producer-arranger). That album was launched in the too through radio interviews. The main radioes interested in Pino Gioia’s music were CHIN Radio International, WEIR Radio (CBS), 3WG 1430AM Rochester, RADIO UNO Toronto, CIAO RADIO CORRIERE ,CKER and TLN.

In 2003 Pino Gioia toured in the main Canadian cities launching his new songs “TI TROVERO’ – I NEED YOU”, these songs received plenty of Canadian and American radioes attention and gave the author an excellent criticals and audience reply.

In 2004 was published the single “QUALCUNA COME ME” and in Italy the song “TI TROVERO’” was included in the compilation “LUNA RECORDS – GRANDI SUCCESSI ITALIANI VOL. 1”.

"SVALUTATION" is the new album released in 2011, followed by a tour of eight dates in Canada and USA, which started  March 27 in Cleveland, OH - USA and ended on April 16 in Sault Ste Marie, ON – Canada of the same year.

The album 2013 is: "CELENTANO SESSION - A Tribute To The Boss"  Pino Gioia,  Revisited and elaborated according to his  own form and style  some of these "Everlasting Oldies"of Adriano Celentano.

June 17th 2015 in Ottawa at The Algonquin  Commons Theatre a new tour starts and after crossing the USA ended in Toronto on November 21.

In 2016 he published the album "DUETS" with the soprano Maria Milano; the tour started on November 9th ends in Thunder Bay (Canada) on August 7th 2017.

In August 2019, just ended the shows for the Semaine Italienne in Montreal, publishes the vinyl album "FIFTY".